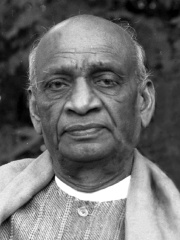 Vallabhbhai Jhaverbhai Patel (Gujarati: [ʋəlːəbːʰɑi dʒʰəʋeɾbʰɑi pəʈel]; pə-TEL; 31 October 1875 – 15 December 1950), commonly known as Sardar, was an Indian lawyer, influential political leader, barrister and statesman who served as the first Deputy Prime Minister also first Home Minister of India from 1947 to 1950. He was a barrister and a senior leader of the Indian National Congress, who played a leading role in the country's struggle for independence, guiding its integration into a united, independent nation.He was one of the conservative members of the Indian National Congress. In India and elsewhere, he was often called Sardar, meaning "chief" in Hindi, Urdu, Bengali and Persian. Read more on Wikipedia

Vallabhbhai patel is most famous for being one of the main leaders of the Indian independence movement and for his role in the country's struggle for independence. He was a great advocate of nonviolent civil disobedience.

Among politicians, Vallabhbhai Patel ranks 1,585 out of 15,577. Before him are Rudolf IV, Duke of Austria, Kwame Nkrumah, Æthelwulf, King of Wessex, Babrak Karmal, Gyges of Lydia, and Ayşe Sultan. After him are Shalmaneser III, Ismail Ibn Sharif, James II of Aragon, Victoria of Baden, Alessandro de' Medici, Duke of Florence, and Abel, King of Denmark.