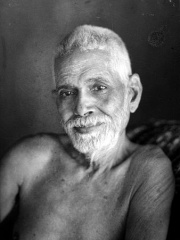 Ramana Maharshi ([rəˈmʌɳə məˈhʌrʃi]; 30 December 1879 – 14 April 1950) was an Indian Hindu sage and jivanmukta (liberated being). He was born Venkataraman Iyer, but is mostly known by the name Bhagavan Sri Ramana Maharshi.He was born in Tiruchuli, Tamil Nadu, India. In 1895, an attraction to the sacred hill Arunachala and the 63 Nayanmars was aroused in him, and in 1896, at the age of 16, he had a "death-experience" where he became aware of a "current" or "force" (avesam) which he recognized as his true "I" or "self", and which he later identified with "the personal God, or Iswara", that is, Shiva. Read more on Wikipedia

Ramana Maharshi is most famous for his teachings and spiritual guidance. He is often referred to as the "saint of Arunachala" and is known for his advices on how to live a life of peace and contentment.

Among philosophers, Ramana Maharshi ranks 290 out of 1,081. Before him are Arnaldus de Villa Nova, Anacharsis, A. S. Neill, Nicolai Hartmann, Félix Guattari, and Roscellinus. After him are Adam of Bremen, Synesius, Robert Nozick, Sri Aurobindo, Hipparchia of Maroneia, and Jerome of Prague.