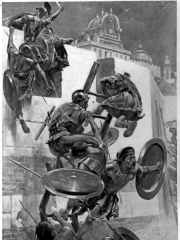 Peucestas (Ancient Greek: Πευκέστας, Peukéstas; lived 4th century BC) was a native of the town of Mieza, in Macedonia, and a distinguished officer in the service of Alexander the Great. His name is first mentioned as one of those appointed to command a trireme on the Hydaspes. Prior to this he must have distinguished himself for his personal valour and prowess, as he was the person selected by Alexander to carry before him in battle the sacred shield, which he had taken down from the temple of Athena at Troy. Read more on Wikipedia

Since 2007, the English Wikipedia page of Peucestas has received more than 56,407 page views. His biography is available in 24 different languages on Wikipedia (up from 22 in 2019). Peucestas is the 639th most popular military personnel (up from 667th in 2019), the 333rd most popular biography from Greece (up from 363rd in 2019) and the 25th most popular Greek Military Personnel.

Page views of Peucestas by language

Others Deceased in 330 BC