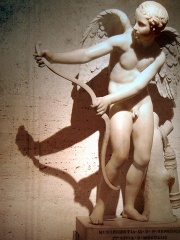 Lysippos (; Greek: Λύσιππος) was a Greek sculptor of the 4th century BC. Together with Scopas and Praxiteles, he is considered one of the three greatest sculptors of the Classical Greek era, bringing transition into the Hellenistic period. Problems confront the study of Lysippos because of the difficulty of identifying his style among the copies which survive. Not only did he have a large workshop and many disciples in his immediate circle, but there is understood to have been a market for replicas of his work, supplied from outside his circle, both in his lifetime and later in the Hellenistic and Roman periods. Read more on Wikipedia

Lysippos is most famous for his sculpture of the god Zeus.

Page views of Lysippos by language

Among sculptors, Lysippos ranks 9 out of 189. Before him are Myron, Praxiteles, Polykleitos, Benvenuto Cellini, Alberto Giacometti, and Camille Claudel. After him are Lorenzo Ghiberti, Antonio Canova, Constantin Brâncuși, Bertel Thorvaldsen, Scopas, and Alexander Calder.

Among people born in 390 BC, Lysippos ranks 1. After him are Shang Yang, Vyasa, Lycurgus of Athens, Hypereides, Alexander V of Macedon, Hakor, Hieronymus of Cardia, Peucestas, Tiberius Coruncanius, Manius Curius Dentatus, and Coenus. Among people deceased in 300 BC, Lysippos ranks 1. After him are Diotima of Mantinea, Wang Jian, Hipparchia of Maroneia, Aristoxenus, Berossus, Nearchus, Eudemus of Rhodes, Callippus, Menaechmus, Hegesias of Cyrene, and Eurydice of Egypt.