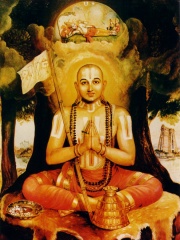 Ramanuja or Ramanujacharya (c. 1017–1137 CE; IAST: Rāmānujā; [ɽaːmaːnʊdʑɐ] ) was an Indian theologian, philosopher, social reformer, and one of the most important exponents of the Sri Vaishnavism tradition within Hinduism. His philosophical foundations for devotionalism were influential to the Bhakti movement.Ramanuja's guru was Yādava Prakāśa, a scholar who was a part of the more ancient Advaita Vedānta monastic tradition. Read more on Wikipedia

Ramanuja was a Hindu philosopher and theologian who is most famous for his philosophy of qualified non-dualism.

Page views of Ramanujas by language

Among people born in 1017, Ramanuja ranks 1. After him are Bermudo III of León, Zhou Dunyi, Beatrice of Lorraine, and Basil Boioannes. Among people deceased in 1137, Ramanuja ranks 3. Before him are Louis VI of France and Lothair II, Holy Roman Emperor. After him are Eric II of Denmark, Antipope Gregory VIII, William X, Duke of Aquitaine, Nikephoros Bryennios the Younger, Adela of Normandy, Pons, Count of Tripoli, Malmfred of Kiev, and Ingeborg of Kiev.