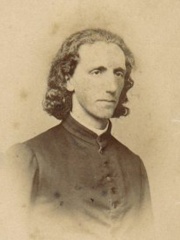 Franz Clemens Honoratus Hermann Josef Brentano (; German: [bʁɛnˈtaːno]; 16 January 1838 – 17 March 1917) was an influential German philosopher, psychologist, and former Catholic priest (withdrawn in 1873 due to the definition of papal infallibility in matters of Faith) whose work strongly influenced not only students Edmund Husserl, Sigmund Freud, Tomáš Masaryk, Rudolf Steiner, Alexius Meinong, Carl Stumpf, Anton Marty, Kazimierz Twardowski, and Christian von Ehrenfels, but many others whose work would follow and make use of his original ideas and concepts. Read more on Wikipedia

Franz Brentano was a philosopher who is most famous for his work on the theory of intentionality.

Among philosophers, Franz Brentano ranks 253 out of 1,081. Before him are Theano, Ibn al-Nafis, Celsus, Vyasa, Orosius, and Jacques Maritain. After him are Aśvaghoṣa, Vladimir Solovyov, Prodicus, Francisco Suárez, Ram Mohan Roy, and Hugh of Saint Victor.