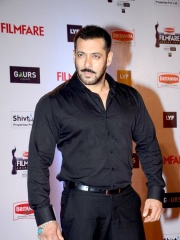 Abdul Rashid Salim Salman Khan (pronounced [səlˈmaːn ˈxaːn]; Hindi: pronunciation ; 27 December 1965) is an Indian film actor, producer, occasional singer and television personality. In a film career spanning over thirty years, Khan has received numerous awards, including two National Film Awards as a film producer, and two Filmfare Awards for acting. He is cited in the media as one of the most commercially successful actors of both world and Indian cinema. Read more on Wikipedia

Since 2007, the English Wikipedia page of Salman Khan has received more than 25,408,934 page views. His biography is available in 73 different languages on Wikipedia making him the 203rd most popular actor.