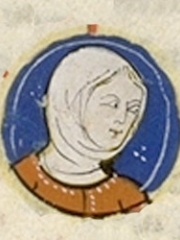 Adela of Normandy, of Blois, or of England (c. 1067 – 8 March 1137), also known as Saint Adela in Roman Catholicism, was a daughter of William the Conqueror and Matilda of Flanders who later became the countess of Blois, Chartres, and Meaux by marriage to Stephen II of Blois. Her husband greatly benefited from the increased social status and prestige that came with such a marriage. Read more on Wikipedia

Page views of Adela of Normandies by language

Among noblemen, Adela of Normandy ranks 316 out of 842. Before her are Blanche of Bourbon, Amadeus I, Count of Savoy, Princess Louise of Orléans, Gaston IV, Count of Foix, Charlene, Princess of Monaco, and Elizabeth Charlotte of the Palatinate, Electress of Brandenburg. After her are Maria of Portugal, Duchess of Viseu, Edgar Ætheling, Euphrosyne of Polotsk, Princess Elisabeth of Saxony, Queen Letizia of Spain, and Ana de Mendoza, Princess of Eboli.

Among people born in 1065, Adela of Normandy ranks 4. Before her are Pope Callixtus II, Niels, King of Denmark, and Robert II, Count of Flanders. After her are Vladislaus I, Duke of Bohemia, Bertrand, Count of Toulouse, Adela of Flanders, Humbert II, Count of Savoy, and Adelaide of Rheinfelden. Among people deceased in 1137, Adela of Normandy ranks 7. Before her are Louis VI of France, Lothair II, Holy Roman Emperor, Ramanuja, Eric II of Denmark, William X, Duke of Aquitaine, and Antipope Gregory VIII. After her are Nikephoros Bryennios the Younger, Pons, Count of Tripoli, Malmfred of Kiev, and Ingeborg of Kiev.