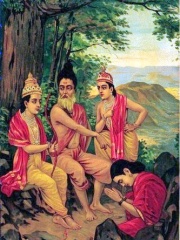 Brahmarshi Vishvamitra (Sanskrit: विश्वामित्र, IAST: Viśvā-mitra) is one of the most venerated rishis or sages of ancient India. According to Hindu tradition, he is stated to have written most of the Mandala 3 of the Rigveda, including the Gayatri Mantra. The Puranas mention that only 24 rishis since antiquity have understood the whole meaning of —and thus wielded the whole power of — the Gayatri Mantra. Read more on Wikipedia

Vishvamitra is most famous for being one of the first people to perform a yajna, or sacrifice, in order to receive a boon from the gods.

Page views of Vishvamitras by language

Among politicians, Vishvamitra ranks 2,659 out of 15,577. Before him are Attalus III, Adelaide of Maurienne, Léon Gambetta, Vsevolod I of Kiev, Bolesław III Wrymouth, and Pepin I of Aquitaine. After him are Cecrops I, Kārlis Ulmanis, Louise Françoise de Bourbon, Duchess of Bourbon, Gisela of Hungary, Yusuf ibn Tashfin, and Emperor Ling of Han.