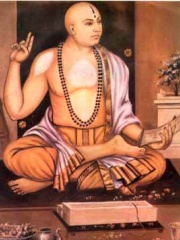 Madhvacharya (Sanskrit: मध्वाचार्य, IAST: Madhvācārya; Sanskrit pronunciation: [mɐdʱʋaːˈtɕaːɽjɐ]; CE 1238–1317), sometimes anglicised as Madhva Acharya, and also known as Pūrna Prajña and Ānanda Tīrtha, was an Indian philosopher, theologian and the chief proponent of the Dvaita (dualism) school of Vedanta. Madhva called his philosophy Tattvavāda meaning "arguments from a realist viewpoint".Madhvacharya was born on the west coast of Karnataka state in 13th-century India. As a teenager, he became a Sanyasi (monk) joining Brahma-sampradaya guru Achyutapreksha, of the Ekadandi order. Read more on Wikipedia

Page views of Madhvacharyas by language

Among philosophers, Madhvacharya ranks 626 out of 1,089. Before him are Dignāga, Ernst Moritz Arndt, Fulbert of Chartres, Zhiyi, Arete of Cyrene, and Jean-Marie Guyau. After him are Alfred Schmidt, Numenius of Apamea, Yang Xiong, Olympiodorus the Younger, Dharmakirti, and Ludwig Klages.

Among people born in 1199, Madhvacharya ranks 5. Before him are Jalal ad-Din Mingburnu, Ferdinand III of Castile, Ladislaus III of Hungary, and Ahmad al-Badawi. After him are Guttorm of Norway, Bohemond V of Antioch, Thomas, Count of Flanders, Raymond-Roupen, and Sava II. Among people deceased in 1278, Madhvacharya ranks 5. Before him are Ottokar II of Bohemia, Al-Nawawi, Emperor Duanzong, and William of Villehardouin.