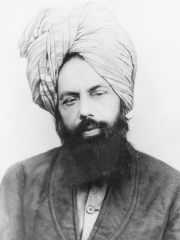 Mirzā Ghulām Ahmad (13 February 1835 – 26 May 1908) was an Indian religious leader and the founder of the Ahmadiyya movement in Islam. He claimed to have been divinely appointed as the promised Messiah and Mahdi—which is the metaphorical second-coming of Jesus (mathīl-iʿIsā), in fulfillment of Islam's latter day prophecies, as well as the Mujaddid (centennial reviver) of the 14th Islamic century.Born to a family with aristocratic roots in Qadian, rural Punjab, Ghulam Ahmad emerged as a writer and debater for Islam. When he was just over forty years of age, his father died and around that time he believed that God began to communicate with him. Read more on Wikipedia

Among religious figures, Mirza Ghulam Ahmad ranks 687 out of 2,238. Before him are Erasmus of Formia, Romanos the Melodist, Johann Tetzel, Guru Gobind Singh, Paulo Miki, and Ibrahim ibn Muhammad. After him are Antipope Ursicinus, Eusebius of Nicomedia, Theophilus of Antioch, Maudgalyayana, Pope Shenouda III of Alexandria, and Canaan.