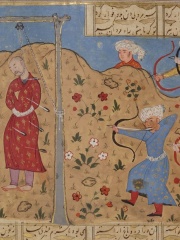 Mazdak (Persian: مزدک, Middle Persian: 𐭬𐭦𐭣𐭪, also Mazdak the Younger; died c. 524 or 528) was a Zoroastrian mobad (priest), Iranian reformer, prophet and religious reformer who gained influence during the reign of the Sasanian emperor Kavadh I. Read more on Wikipedia

Since 2007, the English Wikipedia page of Mazdak has received more than 434,933 page views. His biography is available in 37 different languages on Wikipedia. Mazdak is the 280th most popular philosopher (up from 303rd in 2019), the 79th most popular biography from Iran (down from 76th in 2019) and the 4th most popular Iranian Philosopher.

Mazdak is most famous for his belief that all people should share equally in the wealth of the earth.

Page views of Mazdaks by language

Among philosophers, Mazdak ranks 280 out of 1,089. Before him are Sri Aurobindo, Cleanthes, François Fénelon, Johann Reuchlin, Rudolf Bultmann, and Georges Sorel. After him are Huineng, Robert Nozick, Abraham ibn Ezra, Jacobus Arminius, Prodicus, and Ramana Maharshi.

Among people born in 450, Mazdak ranks 4. Before him are Justin I, Pope Hormisdas, and Pope Anastasius II. After him are Huneric, Ildibad, Gunthamund, Thrasamund, Eraric, Emperor Kenzō, Gesalec, and Aegidius. Among people deceased in 529, Mazdak ranks 1. After him is Theodosius the Cenobiarch.

Among PHILOSOPHERS In Iran