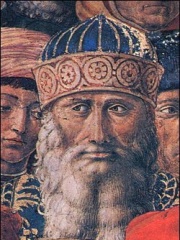 Georgius Gemistus Pletho (Greek: Γεώργιος Γεμιστός Πλήθων; c. 1355/1360 – 1452/1454) was one of the most renowned philosophers of the late Byzantine era. He was a chief pioneer of the revival of Greek scholarship in Western Europe. As revealed in his last literary work, the Nomoi or Book of Laws, which he only circulated among close friends, he rejected Christianity in favour of a return to the worship of the classical Hellenic Gods, mixed with ancient wisdom based on Zoroaster and the Magi.He re-introduced Plato's ideas to Western Europe during the 1438–1439 Council of Florence, a failed attempt to reconcile the East–West schism. Read more on Wikipedia

Gemistus Pletho was a Byzantine philosopher who promoted the idea of a return to paganism. He was also a teacher of emperor Manuel II Palaeologus.

Among philosophers, Gemistus Pletho ranks 266 out of 1,089. Before him are Bruno Bauer, Roger Garaudy, Al-Jahiz, Shen Kuo, Priscus, and Alain Badiou. After him are Vladimir Solovyov, Hugh of Saint Victor, Aristoxenus, Adam of Bremen, Ammonius Saccas, and Carneades.

Among people born in 1355, Gemistus Pletho ranks 1. After him are Mircea I of Wallachia, Konstantin Dejanović, Melchior Broederlam, Manuel Chrysoloras, Gülçiçek Hatun, Isabella of Castile, Duchess of York, Konrad von Jungingen, Thomas of Woodstock, 1st Duke of Gloucester, Theodore I Palaiologos, Dorothea of Bulgaria, and Henry the Mild, Duke of Brunswick-Lüneburg. Among people deceased in 1452, Gemistus Pletho ranks 1. After him are Munjong of Joseon, Švitrigaila, and Ciriaco de' Pizzicolli.