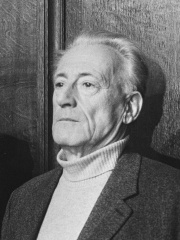 Henri Lefebvre ( lə-FEV-rə, French: [ɑ̃ʁi ləfɛvʁ]; 16 June 1901 – 29 June 1991) was a French Marxist philosopher and sociologist, best known for pioneering the critique of everyday life, for introducing the concepts of the right to the city and the production of social space, and for his work on dialectical materialism, alienation, and criticism of Stalinism, existentialism, and structuralism. In his prolific career, Lefebvre wrote more than sixty books and three hundred articles. Read more on Wikipedia

Henri Lefebvre is most famous for his books "Le Droit à la ville" and "La Production de l'espace". He was a French Marxist philosopher who focused on the relationship between space and the production of space.

Among philosophers, Henri Lefebvre ranks 328 out of 1,081. Before him are Heraclides Ponticus, Jean-Luc Nancy, Gemistus Pletho, Alexandre Koyré, David Strauss, and Moritz Schlick. After him are Mazdak, Ramanuja, Crates of Thebes, Timon of Phlius, Otto Neurath, and Peter Singer.