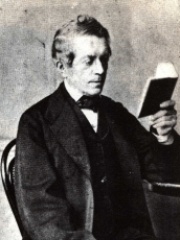 David Friedrich Strauss (German: Strauß [ʃtʁaʊs]; 27 January 1808 – 8 February 1874) was a German liberal Protestant theologian and writer, who influenced Christian Europe with his portrayal of the "historical Jesus", whose divine nature he denied. His work was connected to the Tübingen School, which revolutionized study of the New Testament, early Christianity, and ancient religions. Read more on Wikipedia

David Strauss was a German philosopher who is most famous for his book "The Life of Jesus Critically Examined" in which he argued that the Bible should not be taken literally.

Among philosophers, David Strauss ranks 326 out of 1,081. Before him are Friedrich Heinrich Jacobi, Aenesidemus, Heraclides Ponticus, Jean-Luc Nancy, Gemistus Pletho, and Alexandre Koyré. After him are Moritz Schlick, Henri Lefebvre, Mazdak, Ramanuja, Crates of Thebes, and Timon of Phlius.