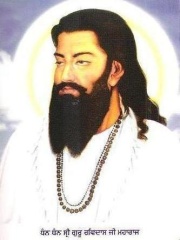 Shri Guru Ravidas ji was a mystic poet-sant of the Bhakti movement and founder of Ravidassia religion during the 15th to 16th century CE. Venerated as a guru (teacher) in the region of Uttar Pradesh, Rajasthan, Gujarat, Maharashtra, Madhya Pradesh and mainly Punjab and Haryana. He was a poet-saint, social reformer and a spiritual figure. The life details of Guru Ravidas ji are uncertain and contested.But most Scholars believe he was born in 1377 CE. Guru Ravidas's devotional Verses were included in the Sikh scriptures known as Guru Granth Sahib. Read more on Wikipedia

Since 2007, the English Wikipedia page of Ravidas has received more than 1,050,396 page views. His biography is available in 15 different languages on Wikipedia. Ravidas is the 522nd most popular philosopher, the 143rd most popular biography from India and the 19th most popular Indian Philosopher.

Page views of Ravidas by language

Among philosophers, Ravidas ranks 522 out of 1,089. Before him are Huiyuan, Thomas Nagel, Themistius, Mary Parker Follett, Buddhaghosa, and Yang Zhu. After him are Paul Virilio, Johann Bernhard Basedow, Bion of Borysthenes, Ahmad Sirhindi, Jean Vanier, and Martha Nussbaum.