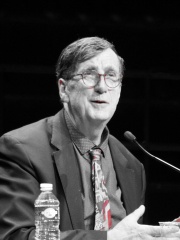 Bruno Latour (French: [latuʁ]; 22 June 1947 – 9 October 2022) was a French philosopher, anthropologist and sociologist. He was especially known for his work in the field of science and technology studies (STS). After teaching at the École des Mines de Paris (Centre de Sociologie de l'Innovation) from 1982 to 2006, he became professor at Sciences Po Paris (2006–2017), where he was the scientific director of the Sciences Po Medialab. Read more on Wikipedia

Among philosophers, Bruno Latour ranks 335 out of 1,081. Before him are Mazdak, Ramanuja, Crates of Thebes, Timon of Phlius, Otto Neurath, and Peter Singer. After him are Elena Cornaro Piscopia, Hwang Jini, Francisco de Vitoria, Antoine Arnauld, Juan Luis Vives, and Jacques Rancière.