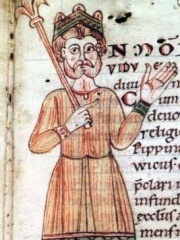 Lothair III, sometimes numbered Lothair II and also known as Lothair of Supplinburg (1075 – 4 December 1137), was Holy Roman Emperor from 1133 until his death. He was appointed Duke of Saxony in 1106 and elected King of Germany in 1125 before being crowned emperor in Rome. The son of the Saxon count Gebhard of Supplinburg, his reign was troubled by the constant intriguing of the Hohenstaufens, Duke Frederick II of Swabia and Duke Conrad of Franconia. Read more on Wikipedia

Lothair II, Holy Roman Emperor is most famous for the Treaty of Verdun in 843. This treaty established the borders of the three kingdoms of East Francia, West Francia, and Lotharingia.

Among politicians, Lothair II, Holy Roman Emperor ranks 1,917 out of 15,577. Before him are Daniel of Galicia, Philippikos Bardanes, Cleopatra V of Egypt, Mongkut, Alec Douglas-Home, and Anders Fogh Rasmussen. After him are Eleonor Magdalene of Neuburg, Quintus Sertorius, Salome Zourabichvili, Abd al-Rahman II, Masoud Barzani, and John I of Castile.

Among people born in 1075, Lothair II, Holy Roman Emperor ranks 1. After him are Al-Zamakhshari, Henry IX, Duke of Bavaria, Adelard of Bath, Emperor Taizong of Jin, Emperor Tianzuo of Liao, Soběslav I, Duke of Bohemia, Orderic Vitalis, and Magnus Erlendsson, Earl of Orkney. Among people deceased in 1137, Lothair II, Holy Roman Emperor ranks 2. Before him is Louis VI of France. After him are Ramanuja, Eric II of Denmark, William X, Duke of Aquitaine, Antipope Gregory VIII, Adela of Normandy, Nikephoros Bryennios the Younger, Pons, Count of Tripoli, Malmfred of Kiev, and Ingeborg of Kiev.