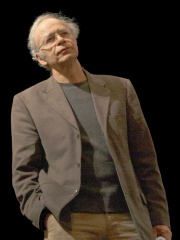 Peter Albert David Singer (born 6 July 1946) is an Australian moral philosopher, currently the Ira W. DeCamp Professor of Bioethics at Princeton University. He specialises in applied ethics and approaches ethical issues from a secular, utilitarian perspective. He is known in particular for his book Animal Liberation (1975), in which he argues in favour of veganism, and his essay "Famine, Affluence, and Morality", in which he argues in favour of donating to help the global poor. Read more on Wikipedia

Peter Singer is most famous for his book Animal Liberation, which argues that the interests of animals should be considered equal to those of humans.

Among philosophers, Peter Singer ranks 334 out of 1,081. Before him are Henri Lefebvre, Mazdak, Ramanuja, Crates of Thebes, Timon of Phlius, and Otto Neurath. After him are Bruno Latour, Elena Cornaro Piscopia, Hwang Jini, Francisco de Vitoria, Antoine Arnauld, and Juan Luis Vives.

Among PHILOSOPHERS In Australia