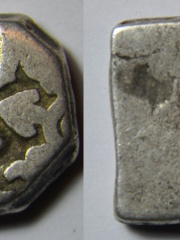 Bindusara (r. c. 297 – c. 273 BCE), also Amitraghāta or Amitrakhāda (Sanskrit: अमित्रघात, "slayer of enemies" or "devourer of enemies") or Amitrochates (Greek: Ἀμιτροχάτης) (Strabo calls him Allitrochades (Ἀλλιτροχάδης)) was the second Mauryan emperor of India. He was the son of the dynasty's founder Chandragupta and the father of its most famous ruler Ashoka. Read more on Wikipedia

Bindusara was most famous for his conquests of the Indian subcontinent, which made him the second ruler of the Mauryan Empire.

Page views of Bindusaras by language

Among politicians, Bindusara ranks 2,839 out of 15,577. Before him are Postumus, Cleopatra VI of Egypt, Lu Xun, Natalya Naryshkina, Guy III of Spoleto, and Irene of Hungary. After him are Lin Zexu, Gina Haspel, Wilhelm Miklas, Duke of Zhou, Michał Korybut Wiśniowiecki, and Agostinho Neto.

Others Deceased in 273 BC