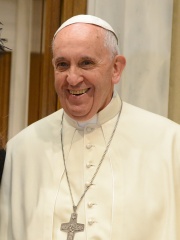 Pope Francis (Latin: Franciscus; Italian: Francesco; Spanish: Francisco; born Jorge Mario Bergoglio, 17 December 1936) is the head of the Catholic Church and sovereign of the Vatican City State since 2013. Francis is the first pope to be a member of the Society of Jesus, the first from the Americas, the first from the Southern Hemisphere, and the first pope from outside Europe since Gregory III, a Syrian who reigned in the 8th century. Born in Buenos Aires, Argentina, Bergoglio worked for a time as a bouncer and a janitor as a young man before training to be a chemist and working as a technician in a food science laboratory. Read more on Wikipedia

Pope Francis is most famous for being the first non-European pope in over 1,200 years. He is also famous for his simple lifestyle and his focus on social justice and environmentalism.

Among religious figures, Pope Francis ranks 7 out of 2,238. Before him are Muhammad, Jesus, Moses, Martin Luther, Abraham, and Mary, mother of Jesus. After him are Paul the Apostle, Solomon, Saint Peter, John the Baptist, Zoroaster, and Saint Nicholas.

Among RELIGIOUS FIGURES In Argentina