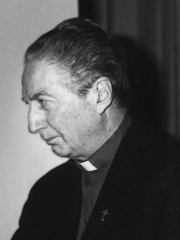 Carlo Maria Martini (15 February 1927 – 31 August 2012) was an Italian Jesuit, cardinal of the Catholic Church and a Biblical scholar. He was Archbishop of Milan from 1980 to 2004 and was elevated to the cardinalate in 1983. A towering intellectual figure of the Roman Catholic Church, Martini was the liberal contender for the Papacy in the 2005 conclave, following the death of Pope John Paul II. According to highly placed Vatican sources, Martini received more votes in the first round than Cardinal Joseph Ratzinger, the conservative candidate: 40 to 38. Read more on Wikipedia

Among religious figures, Carlo Maria Martini ranks 875 out of 2,272. Before him are Abdullah ibn Salam, Gianna Beretta Molla, Melania the Younger, Caesar Baronius, Saint Emeric of Hungary, and Jacob Sprenger. After him are Peter of Alcantara, Qasim ibn Muhammad, Didymus the Blind, 11th Dalai Lama, Junípero Serra, and Rupert of Salzburg.