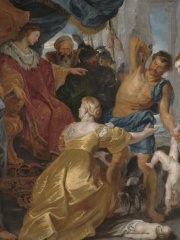 Solomon (; Hebrew: שְׁלֹמֹה‎, Šəlōmō), also called Jedidiah (יְדִידְיָהּ‎, Yǝḏīḏǝyāh), was, according to the Hebrew Bible and Christian Old Testament, a fabulously wealthy and wise monarch of the United Kingdom of Israel who succeeded his father, David. The conventional dates of Solomon's reign are about 970–931 BCE, normally given in alignment with the dates of David's reign. He is described as a king of the United Monarchy, which broke apart into the northern Kingdom of Israel and the southern Kingdom of Judah shortly after his death. Read more on Wikipedia

Solomon is most famous for being the King of Israel and for writing the book of Proverbs.

Page views of Solomons by language

Among religious figures, Solomon ranks 18 out of 2,272. Before him are Pope John Paul II, Jacob, Saint George, Francis of Assisi, Judas Iscariot, and Elijah. After him are John Calvin, Aaron, Ali, Saint Joseph, Abu Bakr, and Pope Benedict XVI.

Others Deceased in 931 BC