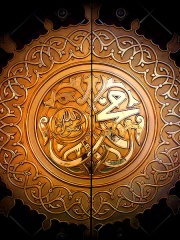 Muhammad ibn Abdullah (Arabic: مُحَمَّد ٱبن عَبْد ٱللَّٰه, romanized: Muḥammad ibn ʿAbd Allāh, Classical Arabic pronunciation: [muˈħammad]; c. 570 – 8 June 632 CE) was an Arab religious, social, and political leader and the founder of the world religion of Islam. According to Islamic doctrine, he was a prophet divinely inspired to preach and confirm the monotheistic teachings of Adam, Abraham, Moses, Jesus, and other prophets. Read more on Wikipedia

Muhammad is most famous for being the founder of Islam.

Page views of Muhammads by language

Among religious figures, Muhammad ranks 1 out of 2,238. After him are Jesus, Moses, Martin Luther, Abraham, Mary, mother of Jesus, Pope Francis, Paul the Apostle, Solomon, Saint Peter, John the Baptist, and Zoroaster.