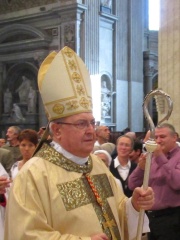 Leonardo Sandri (born 18 November 1943) is an Argentine prelate of the Catholic Church who has been a cardinal since November 2007 and vice dean of the College of Cardinals since January 2020. He was prefect of the Congregation for the Eastern Churches from 2007 to 2022. Read more on Wikipedia

Among religious figures, Leonardo Sandri ranks 1,117 out of 2,238. Before him are Giuseppe Siri, Nicholas of Japan, Pietro Gasparri, Nilus the Younger, Moses the Black, and Robert Estienne. After him are Lutgardis, Maria Alexandrovna Ulyanova, Anthony Maria Zaccaria, Begga, Brigid of Kildare, and Lidwina.

Among RELIGIOUS FIGURES In Argentina