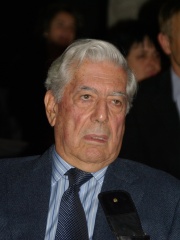 Jorge Mario Pedro Vargas Llosa, 1st Marquis of Vargas Llosa (born March 28, 1936), more commonly known as Mario Vargas Llosa (; Spanish: [ˈmaɾjo ˈβaɾɣaz ˈʎosa]), is a Peruvian writer, politician, journalist, essayist and college professor. Vargas Llosa is one of Latin America's most significant novelists and essayists, and one of the leading writers of his generation. Some critics consider him to have had a larger international impact and worldwide audience than any other writer of the Latin American Boom. Read more on Wikipedia

Since 2007, the English Wikipedia page of Mario Vargas Llosa has received more than 1,422,818 page views. His biography is available in 88 different languages on Wikipedia making him the 209th most popular writer.