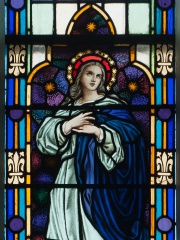 Mary was a 1st century Galilean Jewish woman of Nazareth, the wife of Joseph and the mother of Jesus, according to the canonical gospels and the Quran. Both the gospels of Matthew and Luke in the New Testament and the Quran describe Mary as a virgin, and as being betrothed to Joseph, also in Matthew and Luke. According to Christian theology, Mary conceived Jesus through the Holy Spirit while still a virgin, and accompanied Joseph to Bethlehem, where Jesus was born.According to Catholic and Eastern Christian teachings, at the end of her earthly life, God raised Mary's body directly into heaven; this is known in the Christian West as the Assumption of Mary.Mary has been venerated since early Christianity, and is considered by millions to be the most meritorious saint of the religion. Read more on Wikipedia

Mary, mother of Jesus, is most famous for being the mother of Jesus. She is also an important figure in Christianity because she is the only woman mentioned by name in the Bible.

Page views of Mary, mother of Jesuses by language

Among religious figures, Mary, mother of Jesus ranks 6 out of 2,272. Before her are Muhammad, Jesus, Martin Luther, Moses, and Abraham. After her are Saint Peter, Paul the Apostle, Pope Francis, John the Baptist, Zoroaster, and Pope John Paul II.

Among people born in 100 BC, Mary, mother of Jesus ranks 2. Before her is Julius Caesar. After her are Saint Joseph, Bartholomew the Apostle, Saint Anne, Joachim, Elizabeth, Herodias, Simon of Cyrene, Cornelius Nepos, Gamaliel, and Ambiorix. Among people deceased in 100, Mary, mother of Jesus ranks 1. After her are Saint Joseph, Mary Magdalene, John the Apostle, Bartholomew the Apostle, Saint Anne, Josephus, Salome, Zechariah, Elizabeth, John the Evangelist, and Caiaphas.