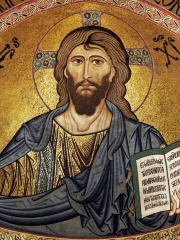 Jesus (c. 4 BC – c. AD 30 / 33), also referred to as Jesus of Nazareth or Jesus Christ, was a first-century Jewish preacher and religious leader. He is the central figure of Christianity. Most Christians believe he is the incarnation of God the Son and the awaited Messiah (the Christ) prophesied in the Old Testament.Virtually all modern scholars of antiquity agree that Jesus existed historically, although the quest for the historical Jesus has yielded major uncertainty on the historical reliability of the Gospels and on how closely the Jesus portrayed in the Bible reflects the historical Jesus, as the only records of Jesus's life are contained in the four Gospels. Read more on Wikipedia

Since 2007, the English Wikipedia page of Jesus has received more than 19,711,709 page views. His biography is available in 246 different languages on Wikipedia making him the 2nd most popular religious figure.

Page views of Jesuses by language

Among religious figures, Jesus ranks 2 out of 2,001. Before him are Muhammad. After him are Martin Luther, Saint Peter, Moses, Abraham, Mary, mother of Jesus, Pope Francis, Paul the Apostle, John the Baptist, Solomon, and Zoroaster.

Others Born in 4 BC