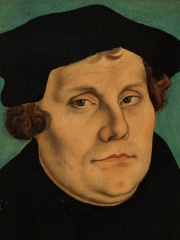 Martin Luther (; German: [ˈmaʁtiːn ˈlʊtɐ] (listen); 10 November 1483 – 18 February 1546) was a German professor of theology, priest, author, composer, former Augustinian monk, and is best known as a seminal figure in the Protestant Reformation and as the namesake of Lutheranism. Luther was ordained to the priesthood in 1507. He came to reject several teachings and practices of the Roman Catholic Church; in particular, he disputed the view on indulgences. Read more on Wikipedia

Martin Luther was a German monk who was an early leader in the Protestant Reformation. He is most famous for his 95 Theses, which he nailed to the door of the church in Wittenberg, Germany.

Among religious figures, Martin Luther ranks 3 out of 2,272. Before him are Muhammad and Jesus. After him are Moses, Abraham, Mary, mother of Jesus, Saint Peter, Paul the Apostle, Pope Francis, John the Baptist, Zoroaster, and Pope John Paul II.