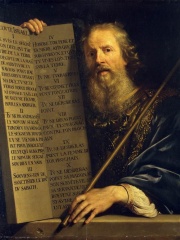 Moses () is considered the most important prophet in Judaism and one of the most important prophets in Christianity, Islam, the Druze faith, the Baháʼí Faith and other Abrahamic religions. According to both the Bible and the Quran, Moses was the leader of the Israelites and lawgiver to whom the authorship, or "acquisition from heaven", of the Torah (the first five books of the Bible) is attributed.According to the Book of Exodus, Moses was born in a time when his people, the Israelites, an enslaved minority, were increasing in population and, as a result, the Egyptian Pharaoh worried that they might ally themselves with Egypt's enemies. Moses' Hebrew mother, Jochebed, secretly hid him when Pharaoh ordered all newborn Hebrew boys to be killed in order to reduce the population of the Israelites. Read more on Wikipedia

Moses is most famous for leading the Jews out of Egypt, and for receiving the Ten Commandments.

Page views of Moses by language

Among religious figures, Moses ranks 3 out of 2,238. Before him are Muhammad and Jesus. After him are Martin Luther, Abraham, Mary, mother of Jesus, Pope Francis, Paul the Apostle, Solomon, Saint Peter, John the Baptist, and Zoroaster.