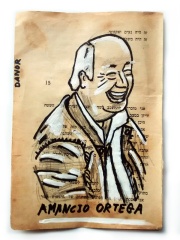 Amancio Ortega Gaona (Spanish pronunciation: [aˈmanθjo oɾˈteɣa ɣaˈona]; born 28 March 1936) is a Spanish billionaire businessman. He is the founder and former chairman of Inditex fashion group, best known for its chain of Zara and Bershka clothing and accessories shops. As of March 2022, Ortega had a net worth of $48.1 billion, making him the third-wealthiest person in Europe after Bernard Arnault and Francoise Bettencourt Meyers, and the 27th-wealthiest in the world. Read more on Wikipedia

Amancio Ortega is most famous for founding Inditex, a Spanish clothing company, and for being the richest person in Europe.