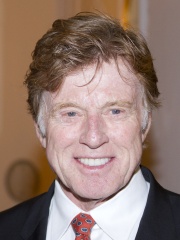 Charles Robert Redford Jr. (born August 18, 1936) is an American actor and filmmaker. He is the recipient of various accolades, including an Academy Award from four nominations, a British Academy Film Award, two Golden Globe Awards, the Cecil B. DeMille Award and the Presidential Medal of Freedom. Read more on Wikipedia

Robert Redford is most famous for his roles in Butch Cassidy and the Sundance Kid, The Sting, and All the President's Men.

Among actors, Robert Redford ranks 80 out of 9,996. Before him are Steve McQueen, Will Smith, Johnny Depp, Paul Newman, Humphrey Bogart, and Hedy Lamarr. After him are Toshiro Mifune, Tom Hanks, Samuel L. Jackson, Gregory Peck, Ava Gardner, and Jean Marais.