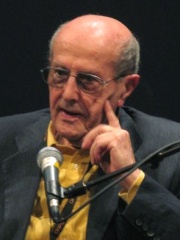 Manoel Cândido Pinto de Oliveira GCSE, GCIH (Portuguese: [mɐnuˈɛɫ doliˈvɐjɾɐ]; 11 December 1908 – 2 April 2015) was a Portuguese film director and screenwriter born in Cedofeita, Porto. He first began making films in 1927, when he and some friends attempted to make a film about World War I. In 1931 he completed his first film Douro, Faina Fluvial, a documentary about his home city Porto made in the city symphony genre. He made his feature film debut in 1942 with Aniki-Bóbó and continued to make shorts and documentaries for the next 30 years, gaining a minimal amount of recognition without being considered a major world film director. Read more on Wikipedia

Since 2007, the English Wikipedia page of Manoel de Oliveira has received more than 218,887 page views. His biography is available in 40 different languages on Wikipedia making him the 85th most popular film director.

Among FILM DIRECTORS In Portugal