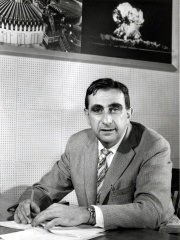 Edward Teller (Hungarian: Teller Ede; January 15, 1908 – September 9, 2003) was a Hungarian-American theoretical physicist who is known colloquially as "the father of the hydrogen bomb" (see the Teller–Ulam design), although he did not care for the title, and was only part of a team who developed the technology. Throughout his life, Teller was known both for his scientific ability and for his difficult interpersonal relations and volatile personality. Teller was born in Hungary in 1908, and emigrated to the United States in the 1930s, one of the many so-called "Martians", a group of prominent Hungarian scientist émigrés. Read more on Wikipedia

Since 2007, the English Wikipedia page of Edward Teller has received more than 1,417,651 page views. His biography is available in 60 different languages on Wikipedia making him the 83rd most popular physicist.

Among PHYSICISTS In Hungary