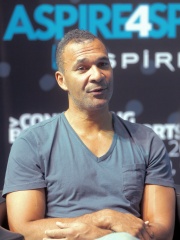 Ruud Gullit (Dutch pronunciation: [ˈryt ˈxʏlɪt] (listen); born Rudi Dil; 1 September 1962) is a Dutch football manager and former footballer who played professionally in the 1980s and 1990s as a midfielder or forward. Widely regarded as one of the greatest players of all time, he captained the Netherlands national team that was victorious at UEFA Euro 1988 and was also a member of the squad for the 1990 FIFA World Cup and Euro 1992. At club level, in 1987 he moved from PSV to Milan for a world record transfer fee. Read more on Wikipedia

Since 2007, the English Wikipedia page of Ruud Gullit has received more than 2,652,580 page views. His biography is available in 61 different languages on Wikipedia making him the 31st most popular soccer player.