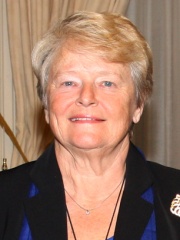 Gro Brundtland (Norwegian pronunciation: [ˈɡruː ˈhɑ̀ːlɛm ˈbrʉ̀ntlɑnː]; born Gro Harlem, 20 April 1939) is a Norwegian politician (Arbeiderpartiet), who served three terms as the 29th prime minister of Norway (1981, 1986–89, and 1990–96) and as the director-general of the World Health Organization from 1998 to 2003. She is also known for having chaired the Brundtland Commission which presented the Brundtland Report on sustainable development. Educated as a physician, Brundtland joined the Labour Party and entered the government in 1974 as Minister of the Environment. Read more on Wikipedia

Among politicians, Gro Harlem Brundtland ranks 1,373 out of 15,577. Before her are Cyrus I, Andronikos I Komnenos, Adnan Menderes, Yang Shangkun, Jamukha, and Mohammed Omar. After her are Qin Er Shi, Perseus of Macedon, An Lushan, Süleyman Demirel, Rodolfo Graziani, and Johan de Witt.