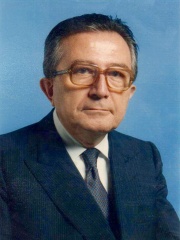 Giulio Andreotti (US: AHN-dray-OT-ee, Italian: [ˈdʒuːljo andreˈɔtti]; 14 January 1919 – 6 May 2013) was an Italian politician and statesman who served as the 41st prime minister of Italy in seven governments (1972–1973, 1976–1979, and 1989–1992) and leader of the Christian Democracy party; he was the sixth-longest-serving prime minister since the Italian unification and the second-longest-serving post-war prime minister. Andreotti is widely considered the most powerful and prominent politician of the so-called First Republic.Beginning as a protégé of Alcide De Gasperi, Andreotti achieved cabinet rank at a young age and occupied all the major offices of state over the course of a 40-year political career, being seen as a reassuring figure by the civil service, business community, and Vatican. In foreign policy, he guided Italy's European Union integration and established closer relations with the Arab world. Read more on Wikipedia

Giulio Andreotti was a Christian Democrat who served as Prime Minister of Italy seven times. He is most famous for being the longest-serving prime minister of Italy.

Among politicians, Giulio Andreotti ranks 1,673 out of 15,577. Before him are Sulayman ibn Abd al-Malik, Cemal Gürsel, Publius Cornelius Scipio, Otto of Bavaria, Danjong of Joseon, and Porfirio Díaz. After him are Coloman, King of Hungary, Emperor Guangwu of Han, Lon Nol, Mohammed V of Morocco, John Kerry, and Leopold, Duke of Lorraine.