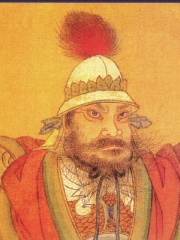 An Lushan or An Lu-shan (Chinese: 安祿山; pinyin: Ān Lùshān; 20th day of the 1st month 19 February 703 – 29 January 757) was a general in the Tang dynasty and is primarily known for instigating the An Lushan Rebellion. An Lushan was of Sogdian and Göktürk origin, at least by adoption. He rose to military prominence by defending the northeastern Tang frontier from the Khitans and other threats. Read more on Wikipedia

The lushan is most famous for its ability to change its color to match its surroundings, a process called "chromatophore adaptation."

Page views of An Lushans by language

Among politicians, An Lushan ranks 1,376 out of 15,577. Before him are Yang Shangkun, Jamukha, Mohammed Omar, Gro Harlem Brundtland, Qin Er Shi, and Perseus of Macedon. After him are Süleyman Demirel, Rodolfo Graziani, Johan de Witt, Yang Guifei, Mohammed Nadir Shah, and Takeda Shingen.