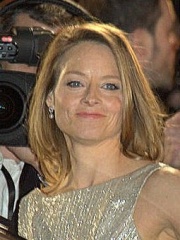 Alicia Christian "Jodie" Foster (born November 19, 1962) is an American actress, director, and producer. Regarded as one of the best actresses of her generation, she is the recipient of numerous accolades, including two Academy Awards, three British Academy Film Awards, three Golden Globe Awards, and the honorary Cecil B. DeMille Award. For her work as a director, she has been nominated for a Primetime Emmy Award. Read more on Wikipedia

Jodie Foster is most famous for her role as a child prostitute in the 1976 film Taxi Driver. She has also starred in other films such as The Silence of the Lambs, The Accused, and Panic Room.