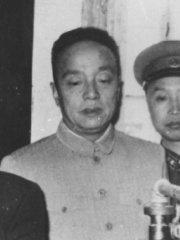 Yang Shangkun (3 August 1907 – 14 September 1998) was a Chinese Communist military and political leader, President of the People's Republic of China (de jure head of state) from 1988 to 1993, and one of the Eight Elders that dominated the Party after the death of Mao Zedong.Born to a prosperous land-owning family, Yang studied politics at Shanghai University and Marxist philosophy and revolutionary tactics at Moscow Sun Yat-sen University. He went on to hold high office under both Mao Zedong and later Deng Xiaoping; from 1945 to 1965 he was Director of the General Office and from 1945 to 1956 Secretary–General of the Central Military Commission (CMC). In these positions, Yang oversaw much of the day-to-day running of government and Party affairs, both political and military, amassing a great deal of bureaucratic power by controlling things like the flow of documents, the keeping of records, and the approval and allocation of funds. Read more on Wikipedia

Yang Shangkun was most famous for his role in the Tiananmen Square protests of 1989.

Among politicians, Yang Shangkun ranks 1,370 out of 15,577. Before him are Genrikh Yagoda, Tedros Adhanom, Constantine III, Cyrus I, Andronikos I Komnenos, and Adnan Menderes. After him are Jamukha, Mohammed Omar, Gro Harlem Brundtland, Qin Er Shi, Perseus of Macedon, and An Lushan.