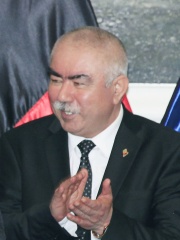 Abdul Rashid Dostum ( (listen) AHB-dəl rə-SHEED dohs-TOOM; Dari: عبدالرشید دوستم‎, Uzbek Latin: Abdul Rashid Do‘stum, Uzbek Cyrillic: Абдул Рашид Дўстум; born 25 March 1954) is an Afghan politician, Marshal in the Afghan National Army, and founder and leader of the political party Junbish-e Milli. Dostum was a major army commander in the communist government during the Soviet-Afghan War, and in 2001 was the key indigenous ally to US Special Forces and the CIA during the campaign to topple the Taliban government. He is regarded to be both one of the most powerful and most notorious warlords since the beginning of the Afghan wars, known for siding with winners during different wars.Born into an ethnic Uzbek peasant family in Jawzjan Province, Dostum joined the People's Democratic Party of Afghanistan (PDPA) as a teenager before enlisting in the Afghan National Army and training as a paratrooper, serving in his native region around Sheberghan. Read more on Wikipedia

Among politicians, Abdul Rashid Dostum ranks 4,436 out of 15,710. Before him are Vsevolod the Big Nest, Brigitte Bierlein, Hedvig Sophia of Sweden, Maeda Toshiie, Antiochus X Eusebes, and Agrippa Menenius Lanatus. After him are Fuchai, Emperor Xiaozong of Song, Abdou Diouf, Emperor Sutoku, Fusu, and Arame of Urartu.