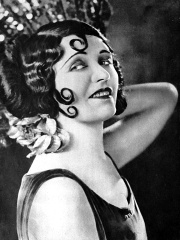 Pola Negri (; born Apolonia Chalupec [apɔˈlɔɲa xaˈwupɛt͡s]; 3 January 1897 – 1 August 1987) was a Polish stage and film actress and singer. She achieved worldwide fame during the silent and golden eras of Hollywood and European film for her tragedienne and femme fatale roles and was acknowledged as a sex symbol.Raised in the Congress Kingdom of Poland, Negri's childhood was marked by several personal hardships: After her father was sent to Siberia, she was raised by her single mother in poverty, and suffered tuberculosis as a teenager. Negri recovered, and went on to study ballet and acting in Warsaw, becoming a well-known stage actress there. Read more on Wikipedia

Pola Negri was a Polish actress and singer who was most famous for her roles in the silent films of the 1910s and 1920s.