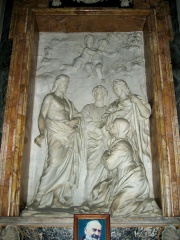 In the New Testament, Salome was a follower of Jesus who appears briefly in the canonical gospels and in apocryphal writings. She is named by Mark as present at the crucifixion and as one of the Myrrhbearers, the women who found Jesus's empty tomb. Interpretation has further identified her with other women who are mentioned but not named in the canonical gospels. Read more on Wikipedia

Since 2007, the English Wikipedia page of Salome has received more than 2,449,562 page views. Her biography is available in 30 different languages on Wikipedia. Salome is the 416th most popular religious figure (up from 433rd in 2019).

Salome is most famous for her dance of the seven veils, which she performed for Herod Antipas in order to get John the Baptist's head on a platter.

Page views of Salomes by language

Among people born in 50, Salome ranks 7. Before her are Judas Iscariot, Epictetus, Juvenal, Zacchaeus, Apollodorus of Damascus, and Simon bar Kokhba. After her are Simon Magus, Rabbi Akiva, Charaka, Osroes I, Gaius Calpurnius Piso, and Saint Petronilla. Among people deceased in 100, Salome ranks 19. Before her are Caiaphas, Longinus, Barabbas, Dionysius the Areopagite, Herodias, and Thecla. After her are Apollonius of Tyana, Simon of Cyrene, Saint Sarah, Anna the Prophetess, Ananias of Damascus, and Nicodemus.