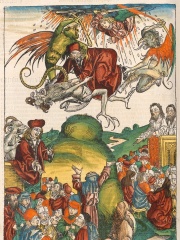 Simon Magus (Greek Σίμων ὁ μάγος, Latin: Simon Magus), also known as Simon the Sorcerer or Simon the Magician, was a religious figure whose confrontation with Peter is recorded in Acts 8:9–24. The act of simony, or paying for position, is named after Simon who tried to buy his way into the power of the Apostles. According to Acts, Simon was a Samaritan magus or religious figure of the 1st century AD and a convert to Christianity, baptised by Philip the Evangelist. Read more on Wikipedia

Simon Magus is most famous for his attempt to buy the power of the Holy Spirit from Peter.

Among people born in 50, Simon Magus ranks 8. Before him are Epictetus, Juvenal, Zacchaeus, Apollodorus of Damascus, Simon bar Kokhba, and Salome. After him are Rabbi Akiva, Charaka, Osroes I, Gaius Calpurnius Piso, Saint Petronilla, and Pacorus II. Among people deceased in 65, Simon Magus ranks 4. Before him are Seneca the Younger, Lucan, and Poppaea Sabina. After him are Gaius Calpurnius Piso and Lucius Junius Gallio Annaeanus.