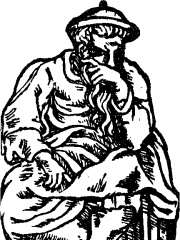 Akiva ben Yosef (Mishnaic Hebrew: עֲקִיבָא בֶּן יוֹסֵף‎ ʿĂqīḇāʾ ben Yōsēf; c. 50 – 28 September 135 CE), also known as Rabbi Akiva (רַבִּי עֲקִיבָא‎), was a leading Jewish scholar and sage, a tanna of the latter part of the first century and the beginning of the second century. Rabbi Akiva was a leading contributor to the Mishnah and to Midrash halakha. Read more on Wikipedia

Rabbi Akiva is most famous for saying "let the words of my mouth and the meditation of my heart be acceptable in thy sight, oh Lord, my strength and my redeemer."

Among people born in 50, Rabbi Akiva ranks 9. Before him are Juvenal, Apollodorus of Damascus, Simon bar Kokhba, Zacchaeus, Salome, and Simon Magus. After him are Osroes I, Charaka, Gaius Calpurnius Piso, Yohanan ben Zakkai, Domitilla the Elder, and Vologases II of Parthia. Among people deceased in 136, Rabbi Akiva ranks 1. After him are Vibia Sabina and Eleutherius of Byzantium.