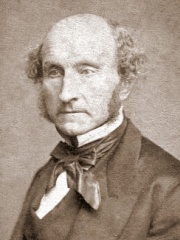 John Stuart Mill (20 May 1806 – 7 May 1873) was an English philosopher, political economist, Member of Parliament (MP) and civil servant. One of the most influential thinkers in the history of classical liberalism, he contributed widely to social theory, political theory, and political economy. Dubbed "the most influential English-speaking philosopher of the nineteenth century", he conceived of liberty as justifying the freedom of the individual in opposition to unlimited state and social control.Mill was a proponent of utilitarianism, an ethical theory developed by his predecessor Jeremy Bentham. Read more on Wikipedia

John Stuart Mill is most famous for his utilitarianism. He believed that the morally right action is the one that brings the most happiness to the greatest number of people.