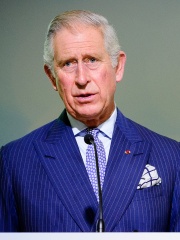 Charles III (Charles Philip Arthur George; born 14 November 1948) is King of the United Kingdom of Great Britain and Northern Ireland and the 14 other Commonwealth realms. He was the longest-serving heir apparent and Prince of Wales and, at age 73, became the oldest person to accede to the British throne, upon the death of his mother, Elizabeth II, on 8 September 2022. Charles was born in Buckingham Palace during the reign of his maternal grandfather, King George VI, and was three when his mother ascended the throne in 1952, making him the heir apparent. Read more on Wikipedia

Charles, Prince of Wales is most famous for being the heir to the British throne. He is the eldest son of Queen Elizabeth II and Prince Philip, Duke of Edinburgh.

Page views of Charles, Prince of Wales by language

Among noblemen, Charles, Prince of Wales ranks 13 out of 842. Before him are Prince Philip, Duke of Edinburgh, Margrethe II of Denmark, Akihito, Archduke Franz Ferdinand of Austria, Queen Elizabeth The Queen Mother, and William the Conqueror. After him are Princess Margaret, Countess of Snowdon, Albert, Prince Consort, Rudolf, Crown Prince of Austria, Lucrezia Borgia, Juan Carlos I of Spain, and Grand Duchess Anastasia Nikolaevna of Russia.