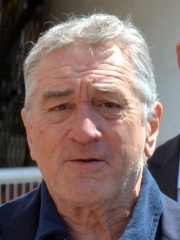 Robert Anthony De Niro Jr. ( də NEER-oh, Italian: [de ˈniːro]; born August 17, 1943) is an American actor and producer. He is particularly known for his nine collaborations with filmmaker Martin Scorsese, and is the recipient of various accolades, including two Academy Awards, a Golden Globe Award, the Cecil B. DeMille Award, and a Screen Actors Guild Life Achievement Award. In 2009, De Niro received the Kennedy Center Honor, and received a Presidential Medal of Freedom from U.S. Read more on Wikipedia

Robert De Niro is most famous for his roles in films such as The Godfather, Taxi Driver, and Raging Bull.