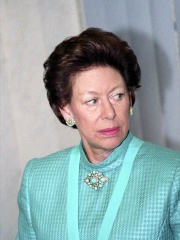 Princess Margaret, Countess of Snowdon, (Margaret Rose; 21 August 1930 – 9 February 2002) was the younger daughter of King George VI and Queen Elizabeth The Queen Mother, and the younger sister and only sibling of Queen Elizabeth II. Margaret was born when her parents were the Duke and Duchess of York, and she spent much of her childhood with them and her elder sister. Her life changed at the age of six, when her father ascended the British throne following the abdication of his brother Edward VIII. Margaret's sister became heir presumptive, with Margaret second in line to the throne. Her position in the line of succession diminished over the following decades as Elizabeth's children and grandchildren were born. Read more on Wikipedia

Princess Margaret, Countess of Snowdon is most famous for being the sister of Queen Elizabeth II.

Page views of Princess Margaret, Countess of Snowdons by language

Among noblemen, Princess Margaret, Countess of Snowdon ranks 14 out of 842. Before her are Margrethe II of Denmark, Akihito, Archduke Franz Ferdinand of Austria, Queen Elizabeth The Queen Mother, William the Conqueror, and Charles, Prince of Wales. After her are Albert, Prince Consort, Rudolf, Crown Prince of Austria, Lucrezia Borgia, Juan Carlos I of Spain, Grand Duchess Anastasia Nikolaevna of Russia, and Harold Harefoot.