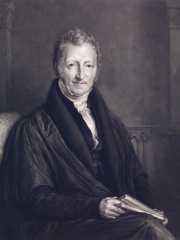 Thomas Robert Malthus (; 13/14 February 1766 – 23 December 1834) was an English cleric, scholar and influential economist in the fields of political economy and demography.In his 1798 book An Essay on the Principle of Population, Malthus observed that an increase in a nation's food production improved the well-being of the population, but the improvement was temporary because it led to population growth, which in turn restored the original per capita production level. In other words, humans had a propensity to utilize abundance for population growth rather than for maintaining a high standard of living, a view that has become known as the "Malthusian trap" or the "Malthusian spectre". Populations had a tendency to grow until the lower class suffered hardship, want and greater susceptibility to famine and disease, a view that is sometimes referred to as a Malthusian catastrophe. Read more on Wikipedia

Thomas Robert Malthus is most famous for his theory that population growth will always outpace food production.